Governing with the Internet

The Net Delusion by Evgeny Morozov brings up some important aspects of “the dark side of the Internet freedom.” Most of the articles I have read so far about the Internet focused on the democratization aspect of the Internet. Scholars were agreeing that the social networking sites improve political discussion, and that the web as a whole is one big market of ideas. I specifically enjoyed Morozov’s The Net Delusion because it opens up the discussion from a unique perspective. What if the revolution is not tweeted, and the Internet empowers authoritarian governments?

Another reason why I like this book is that it incorporates one of my all-time favorite books, 1984, by George Orwell. I joined Facebook in 2005, and at the time, it was only open to college students. Those who wished to join the site had to have a “.edu” email account to become a member. In a sense, Facebook used to be a more elite network, which did not have most of its “invasion” capabilities it does today. Even then, I thought the social networking site reminded me of Orwell’s “Big Brother,” which, by the way, did not stop me from being a big Facebook fan. I am a little bit surprised that Morozov did not make any referral to Rad Bradbury’s Fahrenheit 451. I think Bradbury’s book provides a perfect illustration of  the censored society that is constantly distracted by commercials and cheap entertainment-- something Morozov discusses in detail in his book. One big difference between the fiction novels and our society is that in the novels, it is the government, which does not allow public its privacy. In our day, however, it is the public that volunteers private/ personal information in the exchange of entertainment.

Morozov talks about a number of cases, which illustrate how governments have failed censoring the Internet because it is not practical. Authoritarian governments learned their lesson, and instead of trying to censor the web, they are now using the web to push their own agenda. A good example of such case recently happened in Turkey when an important political figure’s sex type was leaked to the Internet. Following this scandal, a general belief was shaped in public that it was actually the government that leaked the type. Public had a good reason to believe it because several technical experts concluded that the technology behind the scandal was very sophisticated. By looking at the quality of audio, video and other technical elements, they concluded that such sophisticated technology had to be implemented, for instance, 12 hours before the event took place. How can someone know, when and where and with who, an event will occur 12 hours in advance? In order to accomplish that, one has to have access to phone records, email transcripts and such.  Guess who has access to this kind of technology, information, and logistics? Law enforcement! As a result, public was terrified by the idea that the government can creep inside bedrooms, tape citizens' private lives, and put on YouTube.

Overall, I agree with Morozov that we are seeing more cases of governments getting smart about using technology to their advantage. And, with the rise of social networking sites, as anonymity disappears, authoritarian governments are getting more successful in their efforts. Morozov’s face recognition discussion made me think of another great example, a scene from the movie The Minority Report. The movie depicts an era where everyone’s eyes are scanned by 3D screens. Tom Cruise eventually undergoes an eye replacement procedure in order to protect his true identity from the government agents (see the YouTube video).

Well, I am not as pessimistic about the future as Morozov is, but at the same time I agree with his argument that the technology may not always guide the ship called democratization in the right direction.

The cartoon below was published in 2008 as a response to Turkey's problematic Internet laws. It suggests that the government will eventually ban access to the Internet completely, and that citizens will have to submit a written request to the "State Department of Google Search Engine," if they want to do a basic keyword search. The cartoon reads: 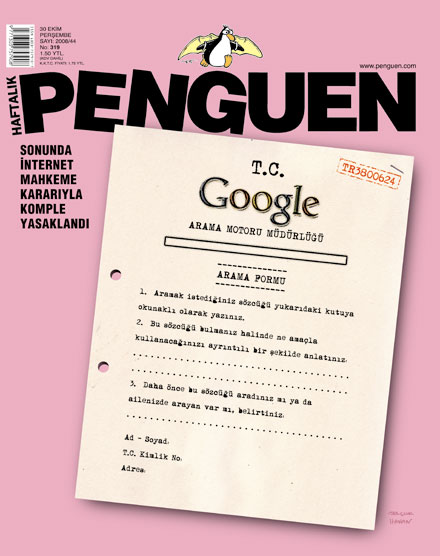 Posted by Unknown at 5:56 AM No comments: